Humanities Texas is accepting applications for our 2018 summer teacher professional development institutes. For history teachers, we will hold institutes in Austin (June 11–14) on America in the 1920s and 1930s, in Houston (June 18–21) on the colonial period, in Dallas (June 25–28) on the Gilded Age. For ELA teachers, we will hold institutes in San Antonio (June 11–14) and Austin (June 18–21) on the American literary tradition.

The institute in Austin (June 11–14), titled "America in the 1920s and 1930s," will take place at the LBJ Presidential Library and focus on America between World War I and World War II, covering topics including politics and economic policies of the 1920s; immigration; prohibition; significant women; African Americans; Latino Americans; the stock market crash of 1929 and the Great Depression; Franklin D. Roosevelt, the New Deal, and his struggle with the Supreme Court; advances in transportation and communication; American art and literature during the interwar period; and the rise and decline of American isolationism.

The institute in Houston (June 18–21), titled "The American Colonies," will take place at the University of Houston and focus on American history during the colonial period, covering topics including Native Americans, European exploration and colonization, colonial governments and economies, the growth of slavery in the colonies, the role of women, religion, and growing British identity in the colonies.

The institute in Dallas (June 25–28), titled "The Gilded Age," will take place at Southern Methodist University and focus on American history during the late nineteenth century, covering topics including the legacy of Reconstruction; presidential politics; capitalism and the rise of big business; Native Americans and U.S. Indian policy; immigration and the immigrant experience; the labor movement; industrialization; the emergence of Jim Crow; scientific, technological, and medical innovation during the Gilded Age; populism and the agricultural revolution; art and literature of the era; women in public life; American imperialism; and significant Supreme Court decisions during the Gilded Age.

The English language arts institutes in San Antonio (June 11–14) and Austin (June 18–21), titled "Teaching the American Literary Tradition," will take place at The University of Texas at San Antonio and The University of Texas at Austin and focus on topics and skills central to the state's high school ELA curriculum. Topics to be addressed include the American Renaissance; the literature of the Civil War era and the Gilded Age; the Harlem Renaissance; American writing during the World Wars; contemporary American fiction and poetry; and how American life has been portrayed in not only literature but also music, drama, television, and film.

The institutes are open to all middle and high school social studies, language arts, and humanities teachers but will focus on topics and skills central to the state's secondary U.S. history and language arts curricula. Priority consideration will be given to early-career teachers in low-performing schools and districts.

The San Antonio institute is supported by the Kronkosky Charitable Foundation.

The Austin, Dallas, and Houston institutes for history teachers are part of the “Democracy and the Informed Citizen” Initiative, administered by the Federation of State Humanities Councils. The initiative seeks to deepen the public’s knowledge and appreciation of the vital connections between democracy, the humanities, journalism, and an informed citizenry.

We thank The Andrew W. Mellon Foundation for their generous support of this initiative and the Pulitzer Prizes for their partnership. Betty Sue Flowers, professor emeritus at The University of Texas at Austin and former director of the LBJ Presidential Library, leads a seminar at at the Byrne-Reed House in Austin. 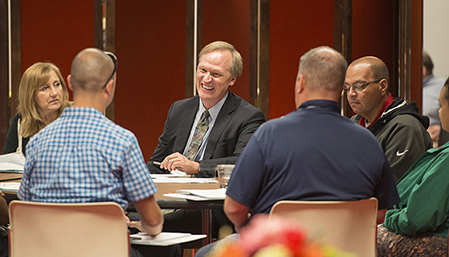 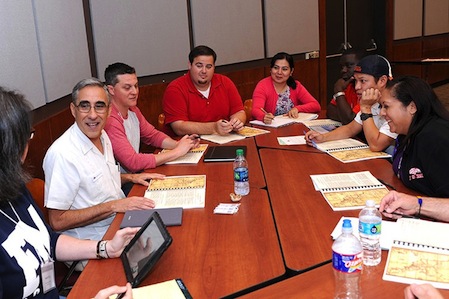 Oscar Casares, associate professor of English at The University of Texas at Austin, signs books after reading and discussing his fiction during the "Teaching the American Literary Tradition" institute in Austin.